God is unimaginable, incomparable and indescribable. The Saints say that He is in Himself what He is.

All names like Sat Naam, Onkar, etc., given for Simran were in like manner Varan Atmak1. Their sole functions were:

a. to help build up Dhyan or one-pointed concentration, and

b. to serve as passwords for crossing from one plane to another.

The soul’s task – and the Satguru’s – was to reach the fifth plane, Sat Lok, and for this five passwords, one for each realm, were needed. Once the soul entered the regions of pure spirit, no further passwords were necessary. As it beheld the Sat Purush, the Deity of Sat Lok or Sach Khand, and the first definite manifestation of Naam and Form of the Formless and the Nameless, it realised that He – i.e., Sat Purush – and the Satguru were not distinct but one and the same, and that it itself was also of Their very essence. Its search for the Absolute was at last over and it began to merge in Him. As it entered deeper and deeper, being absorbed from Form into the Formless, it passed through Alakh – indescribable – and Agam – inconceivable – until it finally lost itself in the Ocean of Bliss and Consciousness that is the Ultimate Reality beyond any name and form, ineffable, immaculate, indescribable, and immeasurable. It is what it was and nothing more could be said of it. The only way left for describing it was through negatives. It was neither light nor darkness, neither sound nor silence. No Shabd could be said to be resounding there, as Shabd had not yet come into manifestation.

No description can do justice to Him. The Spirit of God, the power and strength acting in the creation, reveals itself as Light and heavenly Sound and is called the Light of God and the Voice of God by the Saints. This revelation of God-into-expression-Power can be perceived by men inside and so it is possible to get into conscious contact with God.

The Saints give Their followers a first-hand experience of the God-Power by making the Light of God visible and the Voice of God audible. In literature, this event is called inauguration into the mysteries of the beyond, baptism or initiation.

The conscious connection with the God-Power is not the privilege of certain denominations or of a definite time. It was and always is a free gift of God and it is granted to everybody who truly seeks for it.

What counts are solely the sincere efforts of the seeker in order to live according to the original guidelines of the Saints. In every age provision is made to give the bread and water of life to those who hunger and thirst for the Truth; the conscious connection with the God-Power, which reveals itself inwardly as the Light of God and the Voice of God.

Is initiation predestined or preordained?

Yes, it is predestined and preordained in the frame-work of the Divine Plan that certain souls are to be accepted and initiated by each Master during His ministry and many a time it so happens that those who are ostensibly unworthy are accepted.

The Master raises some initiated individuals and shows them the splendour of the fifth realm – Sach Khand; most of the initiated are led up to this level. However, as it is described, there is a total of eight realms, and the eighth realm is the aim, that can be reached by everybody in this age, because a higher Power is at work.

The word became flesh: a hundred percent or seventy percent or fifty percent – each time according to the demand of that time. They, the Saints, were at work to the extent, necessary for that time; the Power, however, is the same.

Who is your Guru – Master?

Shabd – Naam, the Light and Sound Principle – is my Guru.

God-into-expression-Power is called Shabd or Word made flesh as it is written in the Bible. And who can give you the contact with It? You can get it where His Mercy is at work – that’s all.

Is initiation conveyed through an authorised representative of the Master valid for all purposes?

Yes, the instructions of initiation imparted through a duly authorised representative of the Master are valid for all purposes. The testing criterion is to have a first-hand Inner Experience of the Divine Light of God and the audible Life Stream at the time of initiation. These are the two astral forms of the Master-Power and if one gets to them by personal experience of rising above body consciousness, there can be no doubt about its validity and efficacy.

The human body is the temple of God. He is waiting there for you. That is why I ask you to look within, with a longing in your heart and silence in your soul. God will reveal Himself to you. You will find Him – no, see Him. 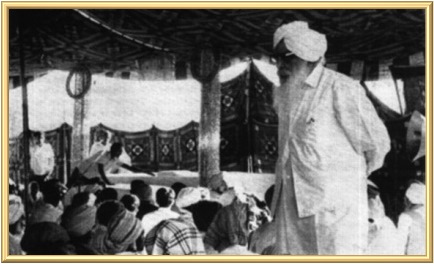 The key-note for Spiritual Progress within is to develop the habit of looking intently into the middle of whatever you see and hearing the Holy Sound Current as coming from the right side, with uninterrupted attention and single-minded devotion.  All else will come with the Grace of the Master.

The mind does not want to allow men to gain knowledge about the soul. Its nature is to seek the amusement and its permanent wavering is hard to get over.

[…] Attuning oneself to the Sound Current is the only way to calm the mind and practise concentration. Whatever school of thought or movement we belong to is unimportant. One has not to convert to other believes, but can proceed where he is.

We have to practise honest self-introspection to see how far we advanced on the Inner Path and gained mastership over mind and senses. We can use the mystic experience of past masters as well as their teachings of their practical life, to see wether we really arised to such extraordinary heights. If not we can humbely approch Someone Who did so and accept His help.

It has often been the praxis of the ancient Masters to give experience of the Holy Initiation and competent instructions to a selected circle of disciples who first were confronted with unconceivable hassles as an assay for their earnestness and their faith in the Guru. But in the present age, the Kali Yuga, man is very weak and the Master is all the more affectionate. He generously gives to all, who are thirsty for a gleam of the liberating Truth.

How it is today:

In the alteration from Kali Yug to Sat Yug don’t call me Master, there is only Shabd. My Father is the One. Har Rai the Guru of the ages, Kabir, is my brother! That’s how Kirpal showed it.

Light and Sound are bestowed freely. The worldly nit-pickers disdain this Grace. Their I-ness is rooted in selfishness.

The arrow of Love hid me from heaven in the middle of my dishonourable heart. Without my doing forever I bleed. Hail Thee, the Only One!

Now this pain of Love is distributed as per the One gives allowance to me. Listen you brothers and sisters, let Him enter! He’s waiting since the beginning on your doorstep.

Let the Real Amrit of sorrow, Naam, in your drouthy heart. This sorrow will irrigate your heart like the water from this world brings the Rose of Jericho to it’s blossom.

Admire only the One, the First, retrieve this water of sorrow, Shabd! Hail Thee, Kirpal! The One, the transformer of the ages.

[…] The words of the Master cannot be detached from the Master. It is from the abundance of the heart that the tongue speaks. The Master is embedded in the Word and His words are expressions of what is in Him; that is, Word, Life-Impulse, and Power. How then can the two be separated from each other? His words undoubtedly pierce through the hearts of the aspirants and none other can know the sweet pangs from which they suffer.

As longing for the Lord grew keen, words of the Master pierced my heart; the mind alone knows the pangs; who else can know another’s pangs?

The more one gives weight to the Master’s words, the more he grows in grace. True devotion to the Master consists in acceptance of, and doing, what He commands. Guru Ram Das exhorts us that the thought of the Master should ever be a companion, no matter what we may be doing. The Master is hidden in His words, and His words are in fact the Real Master.

The Word of the Master ever abides with the initiates. No power on earth can snatch it away. Fire cannot burn it nor can water sweep it off. It is indestructible and immortal. It fathers the fatherless and protects us at every step. It strikes at the root of all doubt and scepticism. Even the angel of death cannot come near it.

Contact Ram Naam through the instructions of the Master; this nectar can be enjoyed in the company of Saints; find thy Native Home with the help of the Master; then there will be no more coming and going.

One cannot come into the treasure of Naam by the performance of deeds on the plane of the senses.

Explanation: 1) Varan Atmak: every name of God, which can be spoken or written.