Illustration to
'The Narration of Mandodari'

King Ravana: The King of Sri Lanka, a well-known figure in the Ramayana. He is traditionally pictured both as a Vedic scholar or pandit and as a demon.

[…] Ravana was said to be proficient in all the four Vedas and six Shastras. Still he is popularly shown with an ass’s head. Why? All his learning proved useless due to his wrong action.

Intellectual pursuits, cleverness, and indulgence in tall talk are easy. It is difficult to control your senses, to rise above body consciousness, to keep thoughts pure, and not to think ill of others. […]

Ram Chandra will come: Ram Chandra is another name for the avatar Rama – an incarnation of Vishnu. This prediction refers to the later events, described in the Ramayana. Ravana kidnapped Rama’s wife Sita. Rama himself then came to Lanka by the aid of a bridge that was made by Hanuman* and beat Ravana in a great battle and killed him.

The bridge was known as Rama’s Bridge. They say that this name was first renamed into 'Adam’s Bridge' by the British Major and geographer James Rennel on a map that was issued by him in 1804. This name refers to an Islamic legend according to which Adam is said to have gone over this bridge from India to Sri Lanka. Nowadays in the western world this bridge is called 'Adam’s Bridge.'

* Hanuman had riddhis and siddhis at his disposal. (See in the illustration to 'The Character of Niranjan' in the subsection 'The Character of Dharam Rai' the passage about the avtaras of the Negative Power with the quotation from the book 'The Wheel of Life,' by Kirpal Singh, 1894–1974.)

On 10th October 2002 the newspaper 'The Hindustan Times' published a report with the title 'NASA Images find 1,750,000 Year Old man-made Bridge.' There it is said:

Space images taken by NASA reveal a mysterious ancient bridge in the Palk Strait between India and Sri Lanka. The recently discovered bridge currently named as Adam’s Bridge is made of chain of shoals, c.18 mi (30 km) long.

The bridge’s unique curvature and composition by age reveals that it is man made. […]

After the discovery of the 'Adam’s Bridge' Indian religious researchers pointed out that the construction of such a bridge between India and Sri Lanka is described in the Epos Ramayana. As a result, in India the 'Adam’s Bridge' is nowadays known as 'Rama Setu' or 'Rama’s Bridge.' 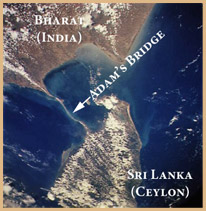 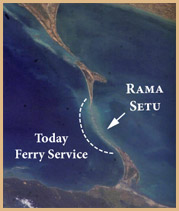 […] The legends as well as Archeological studies reveal that the first signs of human inhabitants in Sri Lanka date back to the primitive age, about 1,750,000 years ago and the bridge’s age is also almost equivalent.

This information is a crucial aspect for an insight into the mysterious legend called Ramayana, which was supposed to have taken place in tredha yuga (more than 1,700,000 years ago).

In this epic, there is a mentioning about a bridge, which was built between Rameshwaram (India) and Srilankan coast under the supervision of a dynamic and invincible figure called Rama who is supposed to be the incarnation of the supreme. *

* This refers to the fact that Rama is an incarnation of Vishnu. And in Hinduism Vishnu having been made more supreme than his brothers Brahma and Shiva by his mother Adhya/Maya is misleadingly regarded as the highest deity at all. (See the section 'Maya makes Vishnu supreme' in the subchapter 'How Vishnu turned black.')

The discovery of the 'Adam’s Bridge' was actually a rediscovery for in addition to the map of James Rennell mentioned above there is more evidence that it was at least still known in the 19th century.