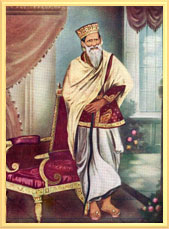 Shiv Dayal Singh was a Great Saint from Agra, mostly known as Swami Ji Maharaj. He was the Guru of Baba Jaimal Singh from Beas.

He revived the teachings of Kabir Sahib and Guru Nanak Sahib and explained them to the common folk in a very simple language. The Guru of Swami Ji Maharaj (Shiv Dayal Singh) was Tulsi Sahib (1763–1843) from Hathras, Who gave the Spiritual Mantle over to Him. Tulsi Sahib was disciple and Spiritual Successor of Ratnagar Rao, the Spiritual Successor of Guru Gobind Singh, the tenth Guru, and He wrote the Ghat Ramayana.

Originally, Tulsi Sahib was called Sham Rao Peshwa, He was the elder brother of Baji Rao Peshwa; He abandoned His throne for Spirituality and settled down in Hathras.

He should not be confused with Tulsi Das, Who was a former Saint (16th century) and Who wrote the Ram Charitra Mansa or Hindi Ramayana.

According to available sources, Swami Ji’s parents were disciples of Tulsi Sahib. They often visited Him in Hathras, thirty miles away, for having His darshan and whenever He came to Agra, they listened to His talks. It was the Saint from Hathras Who named their sons: Shiv Dayal Singh, Brindaban and Partap Singh.