Following His initiation in 1924, Kirpal had a vision of the passing away of His Master – twenty-one years before the actual event. 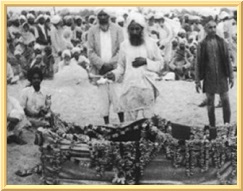 From that day on the thought of impending separation was like iron in the soul.

When He sent the poem to His Beloved, Hazur Baba Sawan Singh Ji Maharaj is reported to have remarked, "So he has already come to know what is to happen." In private, on more than one occasion the disciple begged His Guru to let Him go first, only to be told, "Such is the will of God – you have work to do."

The twelve months mentioned in these eclogues follow the Indian Calendar.

Chet, the first of the months listed, concludes on 12th April –  the month in which Hazur was to go.

In reading these verses we are put in mind of the intense Love of the True Disciple for His Master. We also find in them an image of our own sorrow at the loss on the physical plane of our Beloved Master.