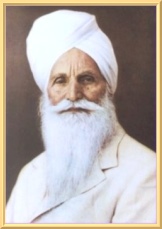 Sawan, Your cup of Naam, You gave to all of us. Intoxication was ours. Forgotten was Thy Simran by some. Simran of the world took place instead. It lasted too long.

Now, Kirpal has come1 to save us all. Every hour, every minute seemed to last like eternity! The rules must be obeyed, because Kirpal, You are the only Ruler.

Separation came through maya, the gambler of Kal. The dices are the game, the rule is to win or to loose. In both cases the soul could be the winner.

The soul cannot win against Kal, only overcome him through the permanency of Shabd-Dhun! If the soul wins, Kirpal is her, if the soul looses, she belongs to Kirpal! In both cases the soul is the winner. Let Kirpal fix the rules!

Explanation: 1) Sawan Singh said: Kirpal Singh! I have done half of your work and have given Naam to over one and a half lakh (is equivalent to 150,000; note by the editor) persons and the rest you have to accomplish. (Source: ‘Hazur Baba Sawan Singh Ji with a short narrative brief Life Sketch – Hazur’s Disease and His Spiritual Succession’ by Kirpal Singh, 1894–1974.)

2) 14 Saints are to come in Kali Yuga, from Nanak Sahib to Sawan Singh, there will be 70 Bhagats (worshippers / lovers of God)  in Kali Yuga. 500,000 souls received Naam, 150,000 thereof through Hazur Sawan Singh, He helped Kirpal’s mission. 150,000 have been initiated by Kirpal Singh Himself and 200,000 shall be it after Kirpal Singh’s departure and more is possible!

I want all of you to become my ambassadors.

Independent of the line of Embodiments created by Kabir, another line came from Guru Nanak. Both were Swateh Gurus and were embodied during many years contemporaneously.

In the biography of Guru Nanak by Bhai Bala, Guru Nanak is said to have stated that in this Kali Yuga – Iron Age – many a Saint would come to lead people godward.

Seventy Bhagats and fourteen Saints would come during this period. The Saints would carry shiploads of people homeward. Those who would not believe would flounder, and those who are slaves of their lower selves would not be accepted.

The fourteenth Saint was Hazur Sawan Singh. Thereafter the Almighty Power came Himself in the form of Kirpal.