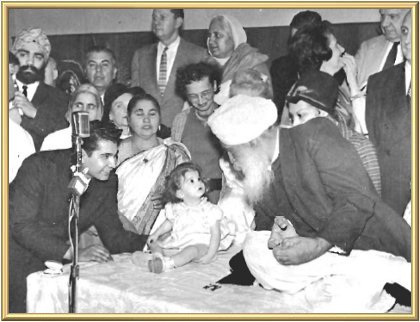 January 1964 saw the close of the Master’s second world tour. He returned to Washington, D.C., from Panama on 18th January, and stayed just ten days – driving up to New York on the morning of the 29th to board the plane for India.

Those ten days at Mr Khanna’s house were blessed beyond words for those of us fortunate enough to be there. Night after night, Satsang – beautiful beautiful Satsang – was held in the living room, with Master sitting in a big chair and talking so sweetly and informally about Love and devotion and God-intoxication. The Satsangs were very informal – people asked questions freely, Bibi Hardevi sang many songs – just a few of the three thousand that Master has written, however –, the Master was accessible after the Satsangs to anyone who wanted Him, and the air was filled to bursting with His Love. 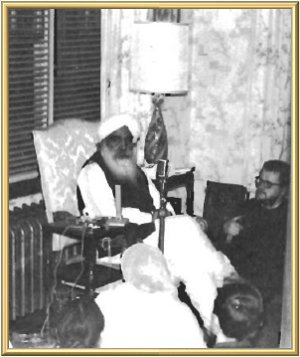 Perhaps the highlight of that glorious time was the celebration of Master’s Birthday, which for the first time – and the only time, so far – was celebrated in the West with the Master physically present. This was achieved by celebrating early, since the Master had no intention of delaying His return to His beloved children in India any longer than necessary; consequently, the birthday was observed twice: once in Washington on 25th January, and once in Delhi on 6th February, the actual date. Three days later, on 9th February, a grand Sant Samagam or convocation of the Saints was held in Delhi in honour of the Master. The American celebration, attended by several hundred, was held at the Friends Meeting House in Washington at 4 p.m. on the 25th. Mr T.S. Khanna presided and introduced many of Master’s principal workers, as well as Bibi Hardevi, who sang one of Master’s songs. During the course of His introductory remarks, Mr Khanna mentioned that the carpet Master was sitting on had been used by Baba Sawan Singh. Instantly, Master pulled the carpet out from under Him and put it on His head, then gently laid it aside.

Whom you love, you love his things. I was thrilled to know this had been my Master’s […] 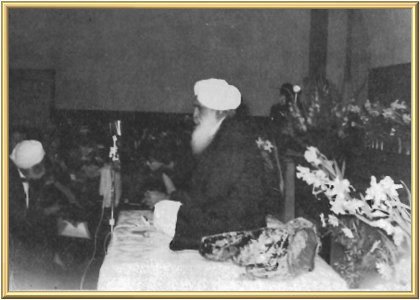 Master’s talk that day was an extended commentary on His Birthday Message which had just been released (‘You never lose anything when you give’). At the conclusion of the talk, Donna Pollard sang one of her lovely crystal songs in praise of Him Who had given her life. Then all His workers gathered to have their picture taken with Him. Downstairs a large crew of selfless servants had voluntarily foregone the Satsang in order to feed the hundreds of people a meal made up of equal parts physical food and Love, with a huge eggless birthday cake baked by Helen McDaniel occupying centre place. When Master came down, the candles were lit and it was conveyed to Him that He was supposed to blow them out. Quick as a flash, He pulled a handkerchief out of His pocket and waved it over the cake, putting them all out at once, to the vast amusement of the Satsangis. 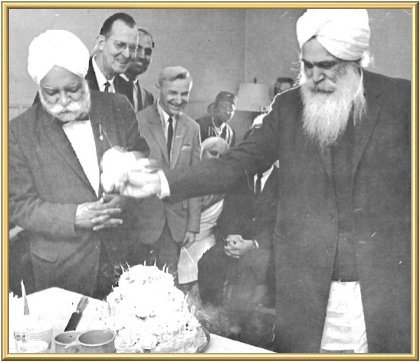 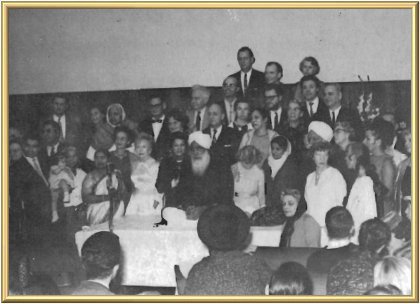 A few days later, on the morning of 29th January, we – seven cars of us – drove up to New York with Him Who, for the last five months had been the source and centre of our lives, knowing it was the last day we would see Him.

Oh God, the agony of that final trip! The pain, the pain, the deep deep pain of separation!

But Master has many children, and what for us was an ending was a joyous new beginning for His thousands and thousands of dear ones in India. The following is from Bibi Hardevi’s account of Master’s return to His suffering children: 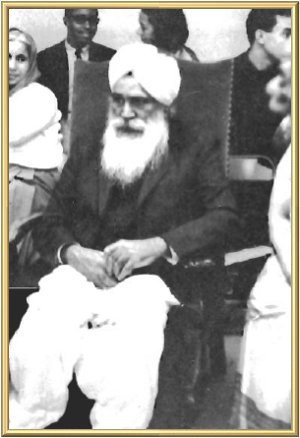 Delhi airport on 31st January was immersed in an atmosphere of tension and excitement. Worried officials and harassed security guards were endeavouring to control a throng of ten thousand people, who had been gathering at the airport since the previous evening. A special car was driven up to the plane as it landed at 5 a.m., India time. Pan American officials requested the Master to enter the car straight away. It was intended that the Master be taken through the airport secretly and with the minimum of fuss, but the authorities had not bargained with the observant devotees. When the Master was escorted through for special customs clearance, the restless crowd suddenly spied a member of His party. With one accord, they advanced through the doors of the customs office and broke down the crush-barriers. In the frenzied excitement many people experienced minor mishaps, spectacles fell from noses and were crushed underfoot, but nothing mattered. The children were united with their Beloved Father.

Arriving at Sawan Ashram, Master was greeted by many thousands of rejoicing people. Devotees came from Pakistan, Bombay, Calcutta, Madras, Pondicherry, Kashmir and all parts of India. The Ashram was literally packed to capacity with teeming humanity. Without resting, Master sat upon the raised platform before His dear ones, who were sitting on the ground and weeping with joy at this happy reunion. An hour later Master was welcomed back to India by Muni Sushil Kumar, eminent Jain leader and Sponsor of the World Fellowship of Religions. There was to be no rest for Master; after a day of general rejoicing a Great Satsang was held in the evening.

Many came for the Master’s Darshan (Holy Sight), and parshad (blessed food) was distributed to the many devotees. Langar (free kitchen) was put into operation in order to feed the multitude. It was a wonderful scene, with flowers and fruits being distributed from hundreds of baskets. There was an atmosphere of supreme joy and Love in the Ashram. In spite of the very cold weather, people worked in the open air. Some were bringing food and others were cooking and serving. Everyone was occupied in loving service to the Master and their fellow beings […]

No one slept on the night of 5th February. At 3 a.m. on the Blessed Day, 6th February – Master’s Birthday – a congregation of forty thousand devotees stood before His bungalow. They sang the Holy Hymn:

Beloved Friend, please do come home, so that I may have Your Darshan!

Master came out into the garden and stood with the congregation for fifteen minutes. He asked them to partake of parshad and told them He would see them later in the morning. A birthday cake was brought out and cut for distribution to devotees. At 7 a.m. the Birthday celebrations commenced and the congregation sat in meditation.

At 1 :30 p.m. the Great Satsang came to an end. The Master blessed the langar and forty thousand people received parshad and were served with dinner. Moving amongst His disciples as they sat partaking of their meal, Master freely bestowed His Darshan on all. Many related their troubles and sorrows to Him, and He was ever on hand with His Spiritual Counsel and loving consolation. […]

The next day, Naam – Holy Initiation – was given to five hundred adults and two hundred children – the entire day was given over to the sitting.

Bibi Hardevi goes on to describe the great Sant Samagam, where Master was honoured by fifty-two different religious organisations:

The ceremony took place in the vast Gandhi Grounds in the heart of the city. A huge stag had been built in order to accommodate the two hundred dignitaries who were to sit with Master […]

Swami Chida Akash gave the opening address of welcome, and then Darshan Singh, the Master’s son, read an original poem which moved the audience deeply. The audience, estimated at one hundred thousand in number, were filled with immense joy at the Master’s return to India. As each leader came forward to honour the Satguru, the great congregation responded with expressions of praise and exultation. In spite of the tremendous number of people present, the Master appeared to be looking at each single person, individually, with the Love and compassion that pours from His wonderful eyes […] It was an historic occasion in the history of India, and in the history of the world, marking as it did a fitting end to the Great World Tour of 1963–1964. 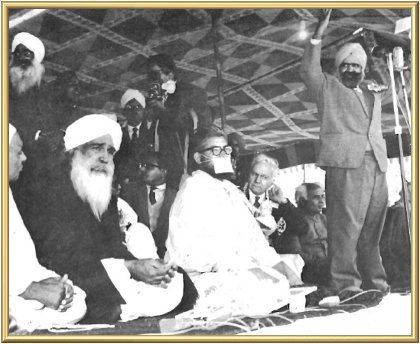