Russell Perkins reports on the 1972 Celebrations 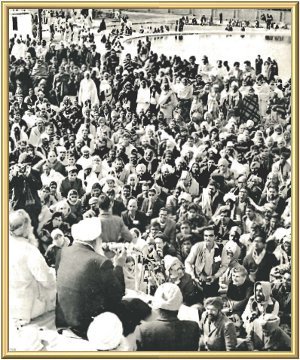 The first thing you see, coming along the highway from Delhi, is the big water tower with Manav Kendra on the top.

The second thing you see is the pool. Then a lot of images crowd in at once – Master’s buffaloes, the buildings, the spaciousness, the Himalayas along the rim that just take your breath away – and you realise with an awful thrill that you’re actually there.

There is no doubt that when Manav Kendra is finished it will be one of the most beautiful places on this planet. Even now, raw and unfinished and muddy, it has the capacity to grip the heart and mind and soul in a way that very few places can.

The pool is just unbelievable. No picture does it justice. Standing at its south end, looking across at the mountains, it seems very obvious that God piled up the mountains with one hand and scooped out the pool with the other. Inner Peace comes of itself while standing there; more easily perhaps than anywhere except in the presence of the Master Himself.

We were told that at the January Satsang in Delhi, the Master asked the congregation whether they wanted to celebrate His birthday in Delhi or at Manav Kendra. A vote was taken, and Manav Kendra was the overwhelming winner. It was announced that free bus service from Delhi would be provided for anyone who wanted to go up, and as always, free food and accommodations – mostly under huge tents – were available for all.

By 4th February, two days before the Birthday, tents were erected all over – a huge tent in front of the main stage to serve as a shelter for Satsang as well as housing, tents in the back field, one big one marked Sawan Ashram Canteen where you could purchase tea and sweets if you were so inclined – the disciples had begun to arrive, and the visitors from the West – a dozen or so – were moved from their temporary quarters in the hospital – due to be inaugurated as such on the Birthday – to a bungalow about ten minutes’ walk away from Manav Kendra. In the afternoon of the 4th, the first Satsang was held: a relatively informal affair, with Swami Arvindananda as guest speaker.

Then that evening the rain began. It came down in torrents all night and all the next day, knocking down and rendering useless every single tent, turning the whole of Manav Kendra into a vast sea of mud, and forcing a cancellation of the day’s activities. Thousands of people had their temporary homes literally washed out from under them, and all day long on the 5th, through the cold driving rain, busload after busload of pilgrims, with bedrolls and blankets, arrived eagerly and hopefully to attend the Satsang – and there was no place for them …

What did Master do? First of all, every available building at Manav Kendra, no matter its state of construction, was pressed into service. The hospital, just vacated by the Westerners – who had slept four to a room –, was turned back into a dormitory with twenty to thirty in a room. The guest house, the Father Homes for the Aged, the dormitories for the workers, and the building which will eventually become Master’s house, none of them finished, were all utilised and thousands were taken care of in this way – although the amount of space per person was considerably less than most Westerners would like. For the rest, Master and His staff, working unceasingly all day long, managed to find enough accommodations in the Dehra Dun area to house all those still unprovided for.

And Master’s attitude was such a perfect example of His teaching. That night at darshan, calm and unruffled as ever after a day of wrestling with problems that would have buried any of us, Master said to me with His infectious chuckle,

Well, what do you think of all our accommodations now? (laughing) Are they quite comfortable?

That night the rain stopped; the next morning, Master’s Birthday, dawned bright and clear and cold and beautiful – with the mountains reflected in the pool and the clouds like living things hovering overhead. Master asked that the 4 a.m. darshan be eliminated this year, and so the Westerners all stayed over in their bungalow.

But the devotees at Manav Kendra turned up at 4 a.m. anyway, and Master came out, as usual, and gave them His darshan – just as if He had never asked them not to …

The morning Satsang was held by the side of the pool, because the area that had been set aside for Satsangs was sopping wet. So a temporary dais was erected and Master came over about 8 a.m. and put us in meditation. What a sweet meditation that was! Sitting on the hard ground, overtones of the storm still with us, the air fresh and bright and cold, and the Grace of the Master within. For forty-five minutes or so the outside world was forgotten and all of us were absorbed inside. Then Master came back, took us out of meditation, and the Satsang began.

Various swamis and yogis were there and spoke, and that morning session was very happy and free. The guest speakers did not speak too long, and one of them, Swami Ved Vyasananda of Hardwar, was a positive delight. This gentleman, a mahamandleshwar with 50,000 sadhus owing him allegiance, is one of the really important Hindu leaders; yet he is very humble and deferential with the Master, and his talk was full of good humour and laughter. Tai Ji – Bibi Hardevi – turned up and sang one of Master’s beautiful songs; Bibi Lajo – Baba Sawan Singh’s housekeeper for many years and the author of the ‘Sakayan’ – made a surprise appearance and attempted unsuccessfully to garland the Master – Who will not accept garlands from anyone; His usual practice is to take the garland in His hands and slip it over the other person’s head before they realise what He is doing; Master’s son, Darshan, up from Delhi, recited one or two of his award-winning Urdu poems in praise of the Master; there was a great deal of music, including a beautiful hymn by Master Pratap Singh Ji, the Music Master or pothi; and the Satsang concluded, after about four hours, with a beautifully serene discourse by the Master.

While everyone was eating from the langar, Mr Sethi, one of Master’s secretaries, called me over.

I want you to meet someone,

He introduced me to the simplest sweetest poorest old man, wearing a turban and dhoti and little else. He said something in Hindi to the man, who came over and hugged me. And his hug was like a child’s hug, you know? Pure and gentle – very, very gentle – like a really young child.

When he left, Sethi said,

That man has the form of the Master within twenty-four hours of the day and night. He is authorised to deliver messages from both Master and Baba Sawan Singh to others who cannot reach them inside. And he is a very simple man,

a very simple man. At his initiation, he had a very high experience; but afterwards, when Master was explaining that He had given them all some capital to start with, this man got up and said, ‘Where, Maharaj Ji? I don’t see any money.’ That is how simple he is.

We all gathered again for the afternoon Satsang at 4 p.m. This time, the crowd was much larger – about 15,000 people, approximately half of what it would have been in Delhi – and the speakers sat on the main stage, which is a permanently constructed building with a roof and addressed the congregation as it sat on the regular Satsang grounds, still soggy but now usable. The honoured guests included, in addition to the swamis already mentioned, Swami Govindananda of the Shahanshah Ashram in Dehra Dun; Maharaj Jagjit Singh, head of the Namdhari Sikhs and an old friend of the Master; and various Muslim, Sikh and Hindu leaders, both lay and clergy. As we were taking our seats, an old man, very rough-hewn and coarse and ragged, was singing his heart out to his own accompaniment on a tambourine over the microphone to the assembled Sangat. The Master’s platform is not only open to the so-called leaders, but to the followers too; to the obscure as well as the famous; to anyone, in fact, who has something to say.

About halfway through the Satsang, the Master and Jagjit Singh and a few others left the stage for a few minutes to dedicate the free homoeopathic dispensary, functioning for the first time. The following morning Master gave Naam to – or as we would say, initiated – about three hundred people. Of this number, a little less than half made contact with the Radiant Form of the Master inside, and about half of the rest saw the strong sunlight inside. Some of these people – these dear, dear people, our brothers and sisters – were moving beyond words. One lady was sitting there in all humility with no eyes on her face at all – not even the sockets; she had been horribly burned in a fire, we heard. She got the Guru’s Form inside. A young Sikh man, smiling so broadly it seemed his face would split apart, was so bubbling over with primordial joy that he could hardly contain himself, nodding in ecstatic agreement with every word that Master said. A young, humble Muslim aspirant was given the Sufi mantra; that is, the five names that Master gave him were in Persian rather than Sanskrit and derived from the Great Sufi Masters – of course, they have the same significance; Master is the embodiment and living fulfilment of both great esoteric lines and can initiate in either way.

In a few days the crowds were gone, and Manav Kendra became again the way I remember it: a place of quiet hard work and gentle loveliness. Memories crowd each other – walking around and around the pool at dusk, wanting to stop but being caught and held by the exquisite beauty and peace; taking a walk around the centre and meeting the Master unexpectedly – not possible in Delhi or most other places anymore, where there are always such huge mobs waiting for Him; and sitting in the big room in the library where Master is living for long long darshans: an hour or more sitting at our Father’s feet and talking things over with Him in the sweetest and most direct way imaginable. Oh Master! One night He thanked somebody for something, and He said,

Thank you so much! What more can I say? In English you say ‘Thank you’ if a man gives you a million dollars or a pin off the floor.

What more can we say? Thank You for giving us life, Master; thank You for having it to give us. Oh Master! Where are the words? 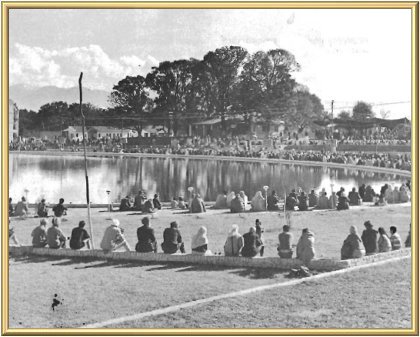 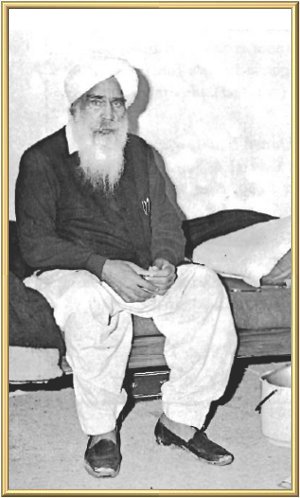 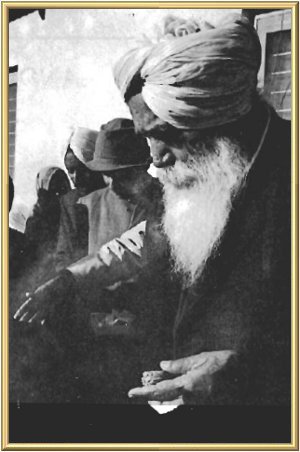 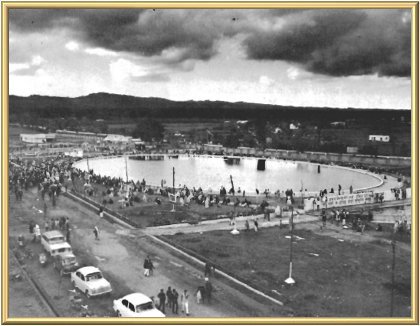 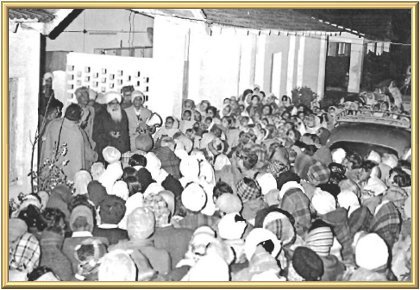 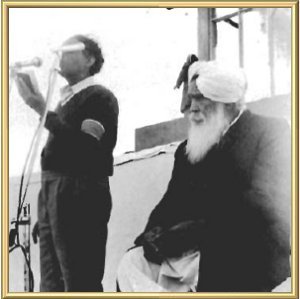 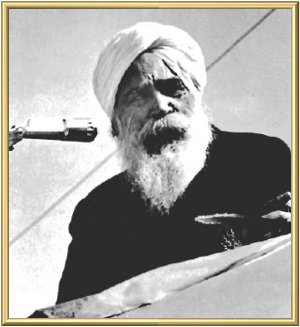 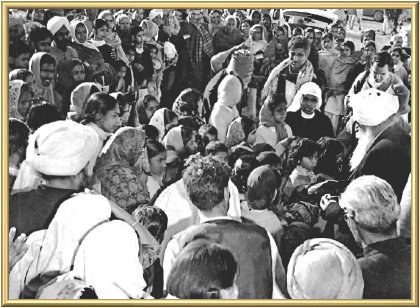 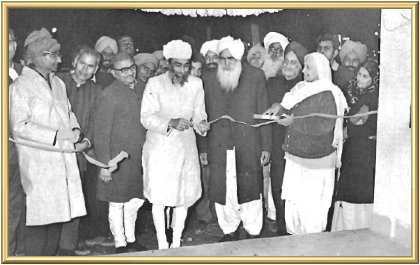 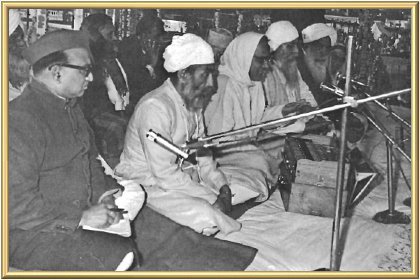 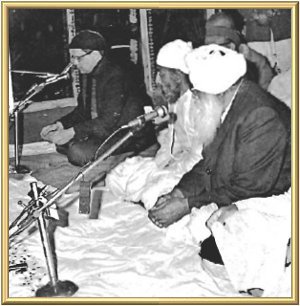 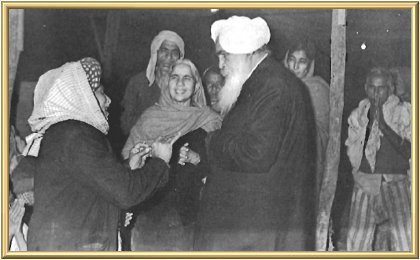 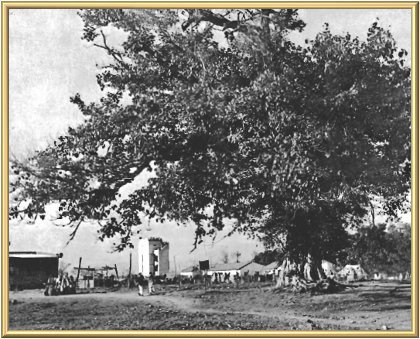