During the Unity of Man Conference 1974 Kirpal Singh made the following statement: 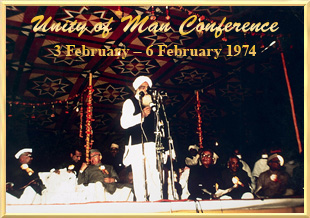 So what I say is nothing new. I would request all of you to spread it, all that you have heard here, wherever you go. Proclaim it from the house-tops that there may be peace and happiness on earth. So I pray to God and you pray with me that He grants us His special Grace and provides for us to have first-hand experience of Reality. The ideal before us is:

That we are all One!

Furthermore, in His last circular letter to His disciples dated 15 May 1974, Kirpal Singh emphasised emphatically in the ninth paragraph:

It would be prudent to clarify that the campaign of Unity of Man has to be carried out above the level of religions without in any way affecting any religious or social orders. It has to obtain in practice the blessings and support of all those who believe in the Gospel of Unity of Man, and could give it strength by taking this Gospel to every human heart around them and convincing them of the need of its acceptance in daily life. It will neither be tagged with Ruhani Satsang1 nor with any other similar organisation2. The enthusiasm of its admirers will be the real force working behind the campaign.

Explanation: 1) Ruhani Satsang was the Spiritual Platform by which Kirpal Singh taught the broad population of the world the unity and the immutable Truth according to Baba Sawan Singh’s rules and His stated wish during His physical stay on earth.