His teachings are esoteric and not exoteric.

God is in every heart. Spirituality is the common heritage of the entire world and humanity and is not reserved for any particular country or nationality. The be-all and end-all of Spirituality is the Union of the soul with the Omnipotent Over-Soul. Man is the roof and crown of all creation and nothing else is greater than he. He is direct manifestation of God and is the marvel of God’s greatness. In the twinkling of an eye he can rise to Heaven and can come back. The sun and the moon, paradise and hell, the earth and the sky are His playgrounds.

As is correctly said:

In short thou art next to God.

He is just like a drop from the Ocean – Creator. He is a ray of the Almighty sun. Both the drop and the ray feel restless so long as they are separated from their source and find rest only when they become merged in it.

Man is the noblest of God’s creation and in his essence is made a perfect being. He can work on two planes – outer and inner. On the outer plane he has knowledge and science of the world to aid him in his endeavours to pass through; but beyond the limits of all knowledge and philosophy, on the Inner Plane, he is quite unable singly to fathom the abysmal depths of the secrets of nature. With the help of learning religious scriptures he tries to attain the Goal, but stumbles at every step. Very soon he realises that he has deficiencies in this respect and is helpless; and unless and until he gets the guidance of a practical Spiritual Master, the Theology, the Knowledge and the Reality remain undecipherable conundrums and enigmas which baffle all attempts at solution. Spiritual Living is acquirable, during our life time only from an awakened and really conscious Master. Such a Master is deep rooted in the Reality and all the qualities of Godly Light are fully reflected and shine forth in Him in abundance. He is fully conversant with the narrow and slippery spots on the Path leading to Reality. He gives to aspirants a link of Life-Impulse which is commonly known as Shabd or Nad among the Hindus, Kalma or Kalam-i-Rabbani among Muslims, Sach, Naam or Hukam among Sikhs, and Word among Christians. Under His superintendence and guidance such a Master opens the Inner Eye of the seeker and leads him from plane to plane until He places him at the feet of God – and all this during his lifetime and not after death.

It is therefore of absolute importance for every intelligent person – no matter of what religion, colour or creed – to betake himself, like the living king or living physician, to the present Living Master of the age if he wants to drink the Nectar of Immortality and attain Life Everlasting.

This is why Maulana Rumi says:

Take hold of the hand of the Master, for without Him the way is full of untold dangers and difficulties. Never for a moment get separated from the Master and never place too much confidence in thy own valour or wisdom.

And the same is said in Guru Granth Sahib1:

Meet the Master and get initiation from Him. Surrender thy body and mind to Him and invert within. Thou shalt find the Path only through analysing the self.

With the thoroughly realised Spiritual Knowledge Hazur was also full of physical beauty – His well-proportioned bodily frame, cyprus-like stature, respondent shining face, forehead, immaculately white long beard, spotless-white head turban, and a mole on the right cheek – all so lovely-attractive – were the focus of myriads of longing eyes. On His feet there was Padam Rekha2. The well-said Persian verse was eminently befitting in His case:

Thou hast beauty of Joseph, healing power of Jesus Christ, and brilliant hand of Moses. In short Thou alone possesseth all these qualities of loveliness that constitute physical assemblage of Graces.

Mere darshan of Hazur’s person awarded calmness to the perplexed and disturbed mind, bestowed consolation to every heart and above all conferred the boon of concentration and the joy of internal satisfaction. His mode of expression and interpretation was extremely clear and impressive. Simple and illuminative words and phrases uttered forth by Him to unravel the problems of Reality were peculiarly sweet and intoxicating. 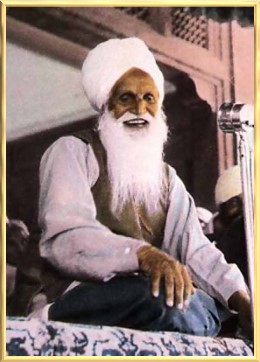 Ordinary pulpit-preachers when they deliver their addresses on the basis of intellect and reasoning simply betray that it is only imitative art as if it is scattering scentless flowers, distributing wine un-intoxicating, beauty without attraction and body without soul. But Hazur unfolded the Divine Mysteries with such an easy and facile Grace that His words went home and penetrated deep down into the hearts and made an everlasting impression. This is possible only when a really Competent Personage with practical personal esoteric experience within expounds the Truth of the actual Spiritual Experiments and has the competency to infuse into the innermost recesses of the brain – not only mere words but the results of His own vast Spiritual Experiments along with the pith of the essential principles thereof. In His speech, there was an uncommon magical charm which captivated the hearts of His hearers.

This Sacred and Grand Master travelled throughout the length and breadth of the country and His Spiritual Messages worked like a balm to hundreds and thousands of lacerated hearts. There is not a village or town in the Punjab where His followers are not found in large numbers. In different parts of India more than thirty Satsang halls were constructed which formed centres for imparting Spiritual Practical Knowledge. Despite reaching an old age, this venerable Personality gave Spiritual Talks and Discourses for hours and hours together – thus quenching the thirst of millions of spiritually thirsty seekers.

At monthly congregations sixty to eighty thousand souls ran to Beas to derive benefit from this Spiritual Spring.

He spread His rays of Spirituality far and wide throughout the world and inspired the spirit of spiritualism in the minds of people led astray by materialism. In His lifetime His public reputation travelled to different lands. His followers comprised about two hundred thousand units which comprised of Hindus, Muslims, Sikhs and Christians of all status and positions – rich and poor, literate and illiterate, of various castes and creeds including Asiatics and Christians of European nationalities.

This magnetic Personality of Hazur attracted aspirants even from European and American countries and they flocked to India to hear His Spiritual Message. The number of His followers in America, Switzerland, England and Germany counts by few thousands and among them the names of Dr Brock, Dr Johnson3, Mr Myers, Dr Schmidt and Colonel Saunders4 are notable.

All religions and all countries are mine and I love them equally.