Illustration to
'The Establishment of the Jagannath Temple'

Jagannath Temple: 'Jagannath' means 'lord of the world' – or Kal. This is the fulfilment of Kal’s former request to Gyani – later Kabir. (See the continuous text 'Kal asks Kabir Sahib for establishing Jagannath' in the subchapter 'By Order of Sat Purush Gyani – later Kabir – comes to awaken the Souls […]'.)

The form of a Brahmin: It is the god or personification – the animating spirit – of the ocean, in classical occidental culture called Neptune or Poseidon, who addresses Kabir here – taking the form of a priest; in India he is simply called Ocean – Sagar.

It is reported that when Kirpal once sat physically in Rishikesh at the Ganges and meditated, the goddess Ganga came in the form of a petite wave and touched His Lotus Feet. She requested to immerge only for one time into Kirpal’s Sarovar to receive some alleviation from all the burdens that people load on her by bathing in the Ganges for – as they wrongly believe – cleaning themselves from their sins and by putting their deads into it.*

* In Rishikesh there have been several notable occurences of which there are report. This is one of them.

Raghubir: The avatar Rama, an incarnation of Vishnu. This refers to the incident as it is described in the Ramayana in which Hanuman, the monkey god, enlisted the assistence of the monkeys and built a bridge to (Sri) Lanka – thus abolishing the power of the ocean.

Flood the town of Dwarka: Normally, floodings and natural disasters are set off by astral powers and happen there, where people do not live righteously. Even the great Flood at the time of Noah was provoked by these powers due to the behaviour of the people living at that time. Herefrom it can also be seen which powers Noah served.

According to current knowledge, the remains of Dwarka had been found in the 20th century.

In his book 'The lost City of Dvaraka' Dr S. Rao reported of the discovery of a sunken city near the peninsula Gujarat in the Gulf of Kutch. The ruins have been discovered in the 1980s. They lie somewhat more than 800 meters away from the today’s temple city Dwarka – which is directly situated on the seashore – at a shallow depth. In the course of explorations six city sectors have been found which had been built along a river. Even remarkable is the discovery of a clay signet that shows a three-headed animal. In the Mahabharata a signet according to this finding is described. During a siege it served the inhabitants of Dwarka as a secret pass to be able to enter the city gates. According to Dr Rao the construction of the sunken city is compatible to the descriptions of the antique Dvaraka as they are given in old texts. 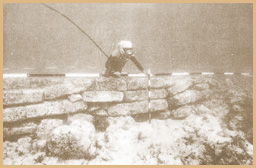 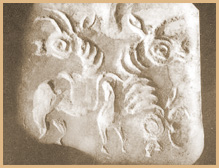 In his abovementioned book he writes:

The discovery of the legendary city of Dvaraka which is said to have been founded by Sri Krishna, is an important landmark in the history of India. It has set at rest the doubts expressed by historians about the historicity of Mahabharata and the very existence of Dvaraka city. […]

It is reported that an underwater museum consisting of a Plexiglas channel is planned for visitation.

Dr S. Rao, today in retirement, was one of the leading Indian archaeologists for decades. Amongst other things he lead many important archaeological projects by order of the director of the 'Archaeological Survey of India,' a department of the Indian government. At his instigation, the Indian 'National Institute of Oceanography' founded a centre for Maritime Archaeology. Under his leadership at those days, the research of this centre resulted in the discovery of Dwarka.