Nanak in the following hymn sketched in highly lyrical language a picture of God watching from His abode His many creations, which bow before Him in reverence. 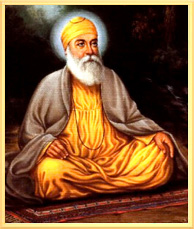 How wonderful Thy gate: how wonderful Thy mansion, from whence Thou watchest Thy great creation. Countless the instruments and harmonies that play therein, countless the measures, countless the singers, that sing Thy praises.The elements – wind, water and fire – sing of Thee, and of Thee sing the king of death and his recording angels.To Thee sing the gods and goddesses whose beauty is of Thy making. To Thee sing Shiva, Brahma and likewise Indra from his throne. To Thee sing the Siddhas in their meditation, and the Sadhus in their contemplation. To Thee sing the ascetics, the righteous, the contented; and the heroes no less.To Thee sing the learned pandits and the rishis from age to age reciting from the holy Vedas. To Thee sing the heart-enslaving nymphs in the heaven, the earth and the nether regions.To Thee sing Thy jewels (Saints) and the sixty-eight places of pilgrimage. To Thee sing the mighty warriors, the heroes of great prowess, and all living creatures. To Thee sing the earthly regions, the heavens and the universes created and supported by Thee.Those that please Thee also sing Thy praises and are saturated with Thy Love and devotion.And there are countless more that sing of Thee, whom one cannot even remember, all lie beyond the ken of Nanak. He is and is alone the Ever-Existent Lord.He is the Truth and true is His Holy Naam, He is, and shall exist forevermore. He Who created all creations shall never depart, though worlds be destroyed.He Who made nature with its many colours and many forms, looks after His own handiwork, as it behoves His own greatness. He is the Supreme Master and does what He lists.He is the King of Kings, the Almighty Lord, and ours, oh Nanak, is only to abide by His will.

King of death and his […] angels: Dharam Rai: keeper of the law who dispenses justice to Souls after they have left the body, according to their actions, whose record is maintained by Chitr and Gupt, the two recording angels.

(See also in the second part of the Anurag Sagar 'The Tale of Creation,' the subchapter 'The four Kinds of Life.')