The Character of Niranjan

Listen, Dharam Das, to the character of Dharam Rai, who has trapped the Souls and deceived them. Taking incarnations, he uttered the Gita and didn’t let the blind Souls cross. Arjuna was his very devoted disciple to whom he gave all the wise knowledge: 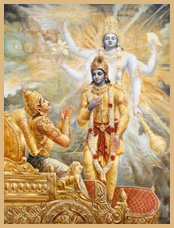 He gave him the knowledge of creating karma and becoming karmaless – and giving up the latter, he made him firm in the former! First he told him about mercy and forgiveness, knowledge, signs karma, and Arjuna became truly devoted in his worship of the Lord Krishna. First Krishna created desire in him, and then he sent him to hell.

Making him give up the Gyan Yoga, he made him firm in karma; and Arjuna, controlled by karma, suffered terribly. Showing him nectar, later he gave him poison. Disguised as a saint, he plundered the Souls.

How long should I describe the deceptive intellect of Yama? Only rare Souls will understand this! When one remains firm in the Path of knowledge, only then will he teach the True Path. Then he will know the deceptions of Yama, and he will leave them: coming into the refuge of the Satguru, the fear of Yama will go away, and he will receive permanent happiness.

– Oh Dharam Das, King of Souls, achieve the Glory of the Satguru! Brighten the Path! I have given you the immortal message.

Note on the picture: This picture shows Krishna and Arjuna before the beginning of the Mahabharata war. Behind Krishna, Vishnu can be seen, whose incarnation was Krishna. After Vishnu turned black, he came as Krishna, in order to take revenge and to bind the serpent.