A Salute and Advice 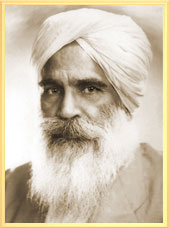 First of all I greet the Absolute, He, Who in His bounteousness made me see the origin, before it was. Then He visualised Himself, it was Kirpal, nobody and nothing is there, only Him.

Beyond Anami, there is His Home, even before He said, I want to be. There, our all Homeland lies!

I greet Sawan Singh, the True Helper, and the month, in which He took His form.

Then I greet Anami Purush, the harbourage of the Param Sants, my True Friends.

From Daswan Dwar to Anami it is a small step, Kirpal goes upon it with us in an instant.

I greet Agam Purush, the friend of Truth. He sent Gobind Singh, Who testified the game of God, and Who was the treasure holder of the treasures and the virtues of the Almighty. All before named themselves, but He did not allow it.

He, who calls me God, will go to hell.

I greet Sat Purush and I am happy for Him, He has many helpers and His game is exhilarating beautiful, it is round.

Again I greet Kirpal, the King of Kings, the Emperor of Spirituality, the Ruler over Anami Purush and that, which comes after, Whose hands brought me into this world, to live in Him.

I have seen all Light, but only Kirpal delights me.

What shall I do, what accomplish?

He, Kirpal said: To persist in front of thousand disciples!

He, Kirpal said: There is nothing more to know, except that you are my disciple now!

Where am I, where should I go, where shall I go?

He, Kirpal said: There, where I place you!

Further I greet the sixteen sons of Sat Purush, each one remarkable. United on the playing field, configurating as a team and His daughter, who is obedient.

I greet Nanak, Who knows the Nine and all, Who followed Him. Angad, Who is versant to me, Whose principle today is lacking in the hearts of the disciples.

Then I greet all the Souls, who are created and all those who are resting in the origin, united with all, in harmony with Sat Shabd.

I greet the Souls here and there, in heaven and hell, I tell them, do not worry, in the end all will be well. The Merciful has come, He Himself became manifest and accomplishes, what no created one ever could accomplish.

My brother, Kabir, comes for you since the beginning by order of Sat Purush, but only the One can be of help. Neither the Highest Expression, nor His Knights and even not His Saints.

Only He, Kirpal, will accomplish it, because in the end only He was, as well as since the beginning.

I greet the righteous and the condemned, the lovers of Truth and the illusionists, because all are in Him, there is no one except Him.

The drop is in the ocean, the illusion is vanquished.

I greet the Souls in Maha Sunn, each one will be set free, because the banner of Kirpal is held aloft.

One part of Sat Purush lightens the three worlds. One fragment of the Almighty lightens the whole creation. Not the visible, audible is, nay, the non-visible, non-audible is. Beyond Anami, there is the whole one.

Kabir describes from Sat Lok and the Jivas describe from Kal Desh. My description is wordless, by using the Word I became wordless, because He gave me His Word forever. The destiny of all of us is Anami, and after, that what will please Him!

The ladder consists of the Light and the Sound, by following what is said and through the practice of this worship devotion will be developed what from Love will arise.

Grant Kal some peace, turn the mind into your friend. Sit down, be still and know you are God. Abstract the seed from the soil and from the field the root, then arise and allow Kirpal to be your leader. The left foot on Kal’s head and by succeeding the right foot, you are in safety. One step, one re-planting, one decision!

Hail Him, Who cannot be described, wordless, gazing and in awe, I bow before Him, Who is not created, for Whom it would have been sufficient to remain in Himself, since the beginning and the time before, Kirpal!

Neither the Highest Expression: Sat Purush.

Nor His Knights: The Avatars of the Almighty Power, not to be confused with the avatars of Kal. (Also see the quotation from 'The Wheel of Life' in the illustration to 'The Character of Niranjan.')

And even not His Saints: The Sants and Khalsas.

The destiny of all of us is Anami:

The Satguru’s task was to take the soul to the Sat Purush on beholding Whom it realised itself to be of the same essence and saw the Satguru and the Supreme Lord as One and indivisible. There it merged into the Sat Naam and with whose help receded further into the Alakh, Agam, Anami (or Radhasoami) and even to a Wonder Region beyond as will be evinced from one of the letters of Baba Ji – presented in 'Spiritual Gems' –, each marking a further stage of the soul’s absorption from name and form into the Nameless and the Formless, the Final Stage being beyond all forms of Light and Sound and therefore wholly indescribable in terms of human experience.